You’ve probably heard by now that fentanyl is the deadliest drug in the United States, but a new study released Thursday by the National Center for Health Statistics offers yet another grim reminder: Deaths caused by the powerful synthetic opioid doubled every year from 2013 to 2016, soaring to 18,300 fatal overdoses from under 2,000 in a single year.

And it keeps getting worse. Preliminary data for 2017 show more than 28,000 deaths involving fentanyl and other synthetic opioids. That’s out of more than 70,000 total fatal drug overdoses, which is higher than the death toll for HIV at the peak of the epidemic.

President Trump, among others, has started to pay attention. The White House is touting the administration’s ongoing efforts to reduce the flow of illicit fentanyl from China and Mexico, but the latest report on fentanyl includes a statistic that suggests the problem is actually worse — and more complicated — than Americans have been led to believe. 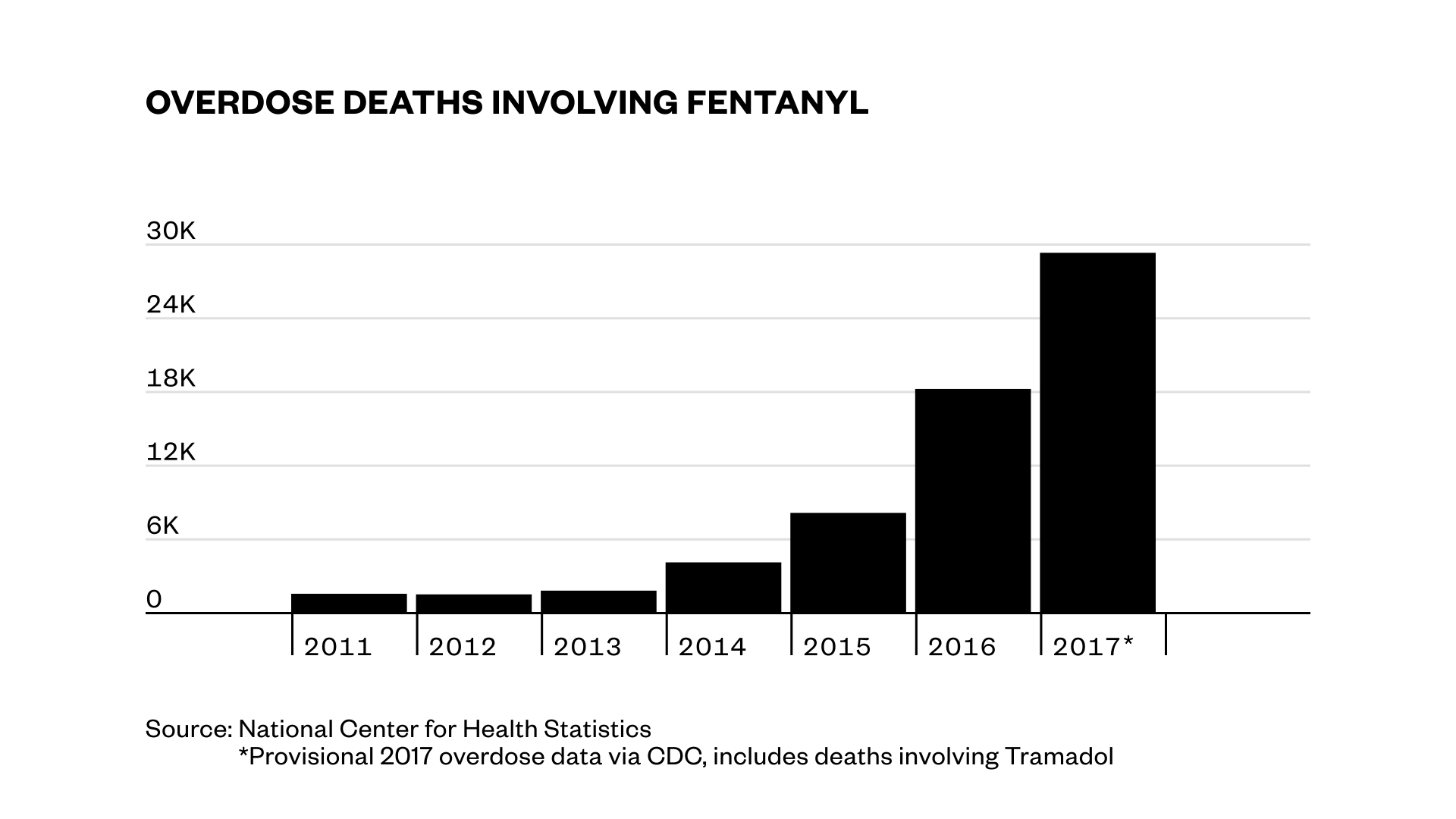 While synthetic opioids kill more Americans than any other type of drug, in 2016 nearly 70 percent of fentanyl deaths also involved one or more other substances. Deaths caused by other drugs have not skyrocketed to the same degree as fentanyl, but overdose rates for both heroin and meth more than tripled from 2011-2016. Cocaine use is also on the rise, and it has consistently remained the second or third-leading cause of fatal overdoses after opioids.

The National Center for Health Statistics report relies on information from death certificates, which don’t always specify the type of drug that caused the overdose. Previous research, including a 2017 study from the University of Virginia, has estimated that opioid mortality rates might actually be 24 percent higher than stated in official reports due to incomplete reporting on death certificates.

Merianne Rose Spencer, a statistician with the National Center for Health Statistics, told VICE News that the overdose totals in her recent fentanyl report should be considered “the minimum number” based on the available data. The problem, she explained, is that “every state has its own way of testing for the drug.”
“It’s improving over time,” Spencer said. “It’s getting more specific. They’re not just writing ‘poly-drug overdose,’ they’re actually writing what the drugs are.”

While the national focus remains on fentanyl, some experts have characterized the current opioid crisis as a “triple wave epidemic” that began with the rise of prescription painkillers in the early 2000s. When authorities cracked down on pill mills, users switched to heroin. And to meet the growing demand for heroin, illicit drug traffickers turned to fentanyl, which is more potent and cheaper to manufacture.

Fentanyl is also mixed with powdered heroin, and law enforcement has warned users about fentanyl-laced cocaine, which may contribute to both the death toll and the increased rate of deaths involving more than one drug.

Trump has claimed that the solution is building a wall along the U.S.-Mexico border, but fentanyl and other drugs are primarily smuggled through ports of entry. Attempts to crack down on the drug supply have repeatedly failed, and also fail to take into account how opioid users often combine their drug of choice with alcohol and benzodiazepines such as Xanax, which can be obtained legally in the United States.

Multi-drug cocktails greatly increase the risk of overdose, and Leo Beletsky, an associate professor of law and health sciences at Northeastern University, said the latest statistics are “probably just the tip of the iceberg” when it comes to understanding how opioid deaths are linked to other drugs. As a result, he said, the U.S. is still failing to utilize harm reduction and other solutions that could actually reduce overdoses.

“Because we used this framing of the culprit being opioids, it shaped the response and it actually focused the attention of officials and policymakers on just that one element, and as a result we got to where we are today,” Beletsky said. “It was the wrong diagnosis. We diagnosed the problem incorrectly. It was not an opioid problem, it was a problem of poly-substance use, and that problem still exists.” (Click to Source)

Recovery Room 7 is a community of people with similar backgrounds, where people from all walks of drug & alcohol recovery can meet together, share, socialize, interact, join in fun activities, share meals, pray and learn. It’s a place of joy and awakening to their true purpose in life. Jesus Christ is always present and ready to receive everyone in Recovery Room 7. We will be located in beautiful Northwest Montana. If you would like to donate to get Recovery Room 7 up and running, please go to our PayPal Donation Link here.